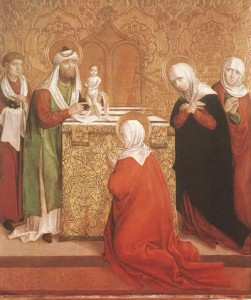 We must live by the obedience of faith, a faith that shows itself in works of charity and self-giving (see Galatians 5:6). That’s the lesson of the two widows in today’s liturgy.

The widow in the First Reading isn’t even a Jew, yet she trusts in the word of Elijah and the promise of his Lord. Facing sure starvation, she gives all that she has, her last bit of food—feeding the man of God before herself and her family.

The widow in the Gospel also gives all that she has, offering her last bit of money to support the work of God’s priests in the Temple.

In their self-sacrifice, these widows embody the love that Jesus last week revealed as the heart of the Law and the Gospel. They mirror the Father’s love in giving His only Son, and Christ’s love in sacrificing himself on the cross.

Again in today’s Epistle, we hear Christ described as a new high priest and the suffering servant foretold by Isaiah. On the cross, He made sacrifice once and for all to take away our sin and bring us to salvation (see Isaiah 53:12).

And again we are called to imitate His sacrifice of love in our own lives. We will be judged, not by how much we give—for the scribes and wealthy contribute far more than the widow. Rather, we will be judged by whether our gifts reflect our livelihood, our whole beings, all our heart and soul, mind and strength.

Are we giving all that we can to the Lord—not out of a sense of forced duty, but in a spirit of generosity and love (see 2 Corinthians 9:6-7)?

Do not be afraid, the man of God tells us today. As we sing in today’s Psalm, the Lord will provide for us, as he sustains the widow.

Today, let us follow the widows’ example, doing what God asks, confident that our jars of flour will not grow empty, nor our jugs of oil run dry.

In the Kingdom of heaven absolutely everyone, as one person, will become one king alongside God, because all will desire one thing alone and their wish will be fulfilled. This is the good thing that, from heaven’s heights, God puts up for sale. Now if someone is wondering what the cost is, here is their answer: he who offers a Kingdom in heaven has no need of earthly coin.

No one can offer God anything except what already belongs to him since all that exists is his. And yet God does not give away so great a thing without a price being placed on it: he does not give it to someone who doesn’t value it. For indeed, nobody gives away something they hold dear without placing some kind of value on it.

From now on, then, if God has no need of your goods neither does he have to give you this great thing if you refuse to love him: all he requires is love, without which nothing constrains his giving. Love, then, and you will receive the Kingdom; love, and you will possess it… Love God more than yourself and already you begin to have what it is you desire to possess fully in heaven.

At the heart of the Liturgy of the Word this Sunday the 32nd in Ordinary Time we find the figure of the poor widow or, more precisely, we find her gesture when she dropped her last coins into the collection box of the Temple treasury. Thanks to Jesus’ attentive look it has become the proverbial “widow’s mite” and indeed is synonymous with the generosity of those who give unsparingly the little they possess.

However, I would like first of all to emphasize the importance of the atmosphere in which this Gospel episode takes place, that is, the Temple of Jerusalem, the religious centre of the People of Israel and the heart of its whole life. The Temple was the place of public and solemn worship, but also of pilgrimage, of the traditional rites and of rabbinical disputations such as those recorded in the Gospel between Jesus and the rabbis of that time in which, however, Jesus teaches with unique authority as the Son of God. He judges the scribes severely as we have heard because of their hypocrisy: indeed, while they display great piety they are exploiting the poor, imposing obligations that they themselves do not observe.

Indeed, Jesus shows his affection for the Temple as a house of prayer but for this very reason wishes to cleanse it from improper practices; actually he wants to reveal its deepest meaning which is linked to the fulfilment of his own Mystery, the Mystery of his death and Resurrection, in which he himself becomes the new and definitive Temple, the place where God and man, the Creator and his creature, meet.

The episode of the widow’s mite fits into this context and leads us, through Jesus’ gaze itself, to focus our attention on a transient but crucial detail: the action of the widow, who is very poor and yet puts two coins into the collection box of the Temple treasury.

Jesus is saying to us too, just as he said to his disciples that day: Pay attention! Take note of what this widow has done, because her act contains a great teaching; in fact, it expresses the fundamental characteristic of those who are the “living stones” of this new Temple, namely the total gift of themselves to the Lord and to their neighbour; the widow of the Gospel, and likewise the widow in the Old Testament, gives everything, gives herself, putting herself in God’s hands for others. This is the everlasting meaning of the poor widow’s offering which Jesus praises; for she has given more than the rich, who offer part of what is superfluous to them, whereas she gave all that she had to live on (cf. Mk 12: 44), hence she gave herself. …

As the Letter to the Hebrews says and also the text we have just heard Jesus’ sacrifice offered “once” sufficed for God to save the whole world (cf. Heb 9: 26, 28), because all the Love of the Son of God made man is condensed in that single oblation, just as all the widow’s love for God and for her brethren is concentrated in this woman’s action; nothing is lacking and there is nothing to add.

The Solemnity of Christ the King (Year B)