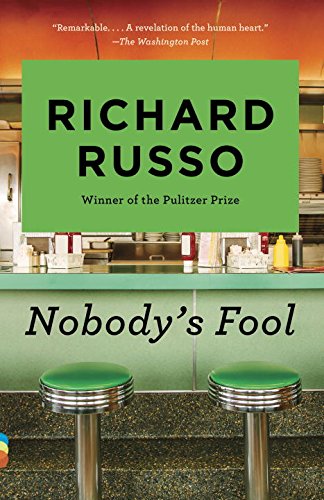 Sully has a chip on his shoulder the size of his long–dead old man, Big Jim Sullivan, a mean drunk and domestic menace, still as big as a door frame in his memories—a ghost he still gives the finger to each time he passes the graveyard.

A profile of improvidence and possibilities spent, Sully is 60–something, has a problem with authority, an allergy to responsibility and self-reflection, and is prone to “stupid streaks,” which he experiences with an out–of–body sense of inevitability.

Lately he’s been dealing with a knee that’s moved way past bum to something approaching permanent disability, nursing his near constant pain with draft beer, Jack Daniels, and anonymous pills that his doctor, Jocko, dispenses from his glove compartment in the parking lot of the offtrack betting establishment.

His throbbing knee, colored an angry eggplant and getting worse by the day, becomes a symbol for Sully’s near incapacitated interior life in Richard Russo’s male–pattern comedy of fathers and sons. Russo tracks Sully through the repetition of his days in Reagan–era Bath, New York, a small Adirondak village caught in a permanent economic downdraft, its last hopes staked on roping in investors for an aptly named theme park, The Ultimate Escape.

Sully lives in a virtually unfurnished flat he has rented for years in an old Victorian home owned by his landlady and former eighth–grade teacher, Beryl Peoples.

Eighty or so, Beryl lives downstairs, sharing her confidences with Driver Ed, a tribal mask she’s hung on the wall, and a framed photo of Clive Sr., her long dead husband and Sully’s old football coach, who was catapulted through a windshield and killed while teaching one doe-eyed Audrey Peach how to drive.

Sully and Beryl live a touching, if offbeat, mother–prodigal relation, he starting each day off by busting into her flat with the stock greeting, “I just thought I’d stop in to make sure you didn’t die in you sleep,” plopping himself in her Queen Anne’s chair to lace up his workboots, as she runs to fetch an ashtray for his dangling cigarette ash.

Sully spends most days with “Rub” Squeers, a gnomic devotee with acute perspiration problems. Together they work under the table as day laborers for Carl Roebuck, a libidinous construction contractor who spends most of his days cheating on his wife.

Days end watching “The People’s Court” on a barstool with his one–legged Jewish lawyer, Wirf, in the White Horse Tavern, one of the more obvious winks Russo makes to academic and literary lore—it being the name, of course, of the Manhattan watering hole where Dylan Thomas belted down his last rye. Thanksgiving snow

As Russo’s book begins, it’s the day before Thanksgiving and tree boughs have been breaking beneath the weight of an early snow.

When he’s picked up hitchhiking by his estranged son, Peter, who’s heading to Thanksgiving dinner at his ex–wife Vera’s, Sully is about to confront more than the cradle he left fall when he abandoned his son, more than the two grandsons whose names he can barely recall: “Every time he laid eyes on Peter he felt in the pit of his stomach the vague, monstrous debt a man owes, a debt more difficult to make good on than money you don’t have. A grandson simply extended the debt, let you know that you still owed it, that the interest is compounded.” Peter, like a youthful imprint of Sully, is overdrawn at the bank of resentment and self-pity. His career as a small college English professor has just gone down the toilet after a failed tenure review, his marriage is imploding, and he’s being pursued by a sexual athlete of a student he’s been consorting with since meeting her at a poetry reading. He hates Sully for his absentee dadism, for his capacity to have seemingly forgot about him for months at a time, even though they lived in the same town. None of this Sully would contest, but he seems incapable of remorse, obsessed as he is with is own father-hatred. In memories that intrude on Sully with growing persistence, Big Jim Sullivan is a monster, some literary spawn of Huck Finn’s “Pap”—a combustible mixture of cruelty and alcohol, a notorious wife–beater who held his head high, wearing a mask of calculated sycophancy and self–pity, that charmed the townsfolk into overlooking his failures.

Sully’s mother is remembered dimly—black and blue most of the time, pitied more than helped by her neighbors, and counseled by her priest to just keep praying for a miracle. She emerges brightly only once—the day when, with young Sully in tow, her one eye swollen shut from another of Big Jim’s beatings, she goes to tell off the priest. When all he can do is scold her for wishing that God smote Big Jim dead, she walks out, saying, “What difference? God isn’t listening.” If Russo’s withering sketch of the family priest seems to pile on a few too many stereotypes, in Sully he has created a subtly powerful portrait of a child of domestic wrath, a man who’d rather believe in blind luck and circumstance than a God so capricious as to give him Big Jim as a dad—a God who, like the priest, seemed “content that people’s lives should be studies of pain and fear.”

Sully’s patrimony is an imperviousness to pain and an absolute refusal of forgive. But with each rim shot of pain in his throbbing knee, each ghost of his father he sees on the streets of his hometown, it becomes clearer that Sully has reached the limits of his life-strategy of pain management and vendetta. Russo’s Bath is peopled by a lively supporting cast—unusual specimens of impaired potential and retarded ambition, described with affection and humor.

But all the ironic humor is a foil to the probing of dark psychological questions, mostly about the complexities of paternity: How far can the apple fall from the tree? Can the sins of the father ever be washed clean? Can you ever forgive the dead—who never beg pardon or pledge to change their ways? Can you ever bury the ghosts of your past without first forgiving them?

“We wear the chains we forge in life,” is an old eighth–grade quotation Sully and Mrs. Peoples joke about absent-mindedly. Nobody’s Fool reminds us that often times the chains people bear are put upon them by blood relations.

There’s no cheap redemption here, no ultimate escape for Sully. Only a slight reprieve, a temporary sleep in the bosom of the mother that he never really had.