More Than A Feminist 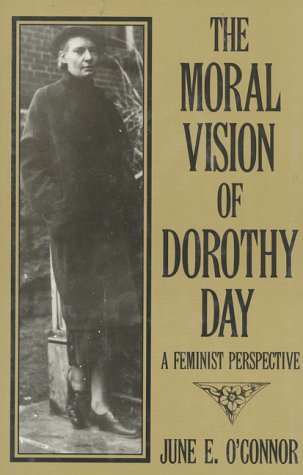 The Moral Vision of Dorothy Day: A Feminist Perspective

At first blush, Dorothy Day wouldn’t seem to make much of a feminist. “Women’s liberation,” she told an interviewer in 1975, “is too self-centered. It’s not geared to the poor but to articulate middle-class women with time on their hands, the ones who have the least to complain about.”

Indeed, there is much in Day’s legacy that seems to conform “to a conventional patriarchal outlook,” according to June O’Connor’s important new study, The Moral Vision of Dorothy Day: A Feminist Perspective. Day, she contends, accepted “traditional, conventional roles assigned to men and women,” and her moral thinking was at times clouded by “sexist thought patterns she inherited and sustained.” Nevertheless, O’Connor recognizes “a hidden feminist dimension” in the life and writing of the co-founder of the Catholic Worker movement.

Approaching Dorothy Day with feminist themes and questions, O’Connor, who teaches religious studies at the University of California, Riverside, opens up new avenues for appreciating Day’s thought. O’Connor argues persuasively that more than a decade after her death, Day has something to contribute to contemporary moral discourse, both in and out of feminist circles.

Through O’Connor’s lens, Day’s feminist appeal is readily seen. Here is a single, working mother, a grandmother, who edited an influential journal of opinion and pioneered a historic American movement for social and religious change. She knew personally the indignities of sexism, having suffered at the hands of machismo, including being pressured into an abortion by a man she loved.

And, in O’Connor’s assessment, Day’s writings resonate with some staple feminist themes. She articulates a “prominent feminist hope,” namely, that women can recover an “intimate connection between the personal and the political, the spiritual and the material, the religious and the social-historical features of human experience.” With many feminists, Day shared a “fundamental and integral vision of justice” which saw the interplay and connection between the exploitation of women, the poor, racial and ethnic minorities, and the natural world.

Day’s ethic is characterized by an intuitive solidarity and identification with the sufferings of the poor and the marginalized: “Part of Day’s distinctive contribution to moral reflection and moral living seems to lie in her capacity to see others in herself and herself in others.”

Despite these concordances, O’Connor notes areas where Day would make feminists wary. Day’s “critical views” on sex outside of marriage and on abortion wouldn’t sit well with many, she ventures. Some would be annoyed that Day apparently “accepted without question” many “patriarchal features” of her religion and the “manifest sexism” of Christian institutions.

O’Connor provides a good introduction for feminists unfamiliar with Day and for followers of Day who might have missed this feminist perspective. Still, one puts O’Connor’s book down disappointed, wishing she had really immersed herself in Day’s life and writings to offer a fuller, more accurate portrait of Day as an American woman and Christian moralist.

Why isn’t O’Connor more interested in looking at the roots of Day’s moral vision and self-identity in her fractured home life and in the ferment of pre-World War I Greenwich Village? Likewise, she is too quick in passing over the influence of the early women’s peace movement on Day’s later ideas in gender and pacifism. Nor does O’Connor make more than a passing connection between Day’s bitter taste of the 1920s sexual revolution and her later positions on gender and sexual politics.

The book is most deficient in discussing Day’s religious beliefs and their influence on her moral vision. For instance, O’Connor claims that Day “accepted without question “ patriarchal “images of God (as Father, King and Judge).” But Day almost never referred to God as judge or king, preferring the images of the forgiving, merciful father in the prodigal son parable, and the unjudging, all-loving husband in the Book of Hosea.

O’Connor suggests that the key to Day’s moral vision lies in her answer to the question: “What kind of person do I want to become?” But by assuming that Day merely rehearsed “patriarchal” beliefs, O’Connor misses the chance to show how Day’s self-awareness blossomed into a mystical desire—for intimacy, love, communion.

One wonders, too, how a feminist study could ignore Day’s attraction to female saints like Therese and mystics like Julian of Norwich. Nor does O’Connor mention Day’s great devotion to Mary, the mother of Christ. Day was once audacious enough to suggest to Betty Friedan and other feminists that Mary was the model of a truly “liberated” woman. Day’s prayers and meditation on Mary should have been important to O’Connor’s inquiry, as they reveal a great deal about Day’s hopes as a woman and a disciple of Christ.

As in her writings about God, the images of parent and lover appear: “Wife of God, Mother of God—a profound mystery,” she pondered in a 1954 column. For her, Mary was at the center of the mystery of the Incarnation. Without her, there was no Christ and no Church: “He shared our human nature because she consented with her fiat that he should. God made subject to man—an inconceivable humility.” Here again, God is shown as a humble suitor—infinitely tender, respectful of Mary’s dignity and freedom.

O’Connor makes a big mistake in taking Day at her word that, as a woman, she couldn’t “understand theological subtleties.” It prevents her from seeing Day clearly: as a woman using all the resources of her life and faith—her gender and her social location, prayer and grace, Scripture and Church teaching—to reflect on her discipleship among the exploited and oppressed struggling to be free.

Day was not a woman parroting patriarchal expectations, but a believer talking of the possibility of God in a world filled with unjust cruelty and suffering. This is a woman seeking salvation, liberation, transcendence. She finds it by entering into the sufferings of the poor, a pilgrimage that she described as the “downward path to salvation,” a meeting in the depths with the risen, still suffering, Christ.

O’Connor devotes scant attention to the mystical and redemptive dimensions of Day’s love of the poor. She claims that Day used the Catholic dogma of Christ’s “mystical body” as a “metaphor … to advance her work.” But actually that dogma helped Day to understand and express her powerful, rousing encounter with Christ in the poor. “How do we know we believe?” she asked in a 1964 meditation on Mary Magdalene’s discovery of the empty tomb. “Because we have seen his hands and his feet in the poor around us…in the unutterably poor who are going through their long-continuing crucifixion.”

The radical’s sojourn for justice and the mystic’s pilgrimage for self-knowledge and union with God come together in Dorothy Day’s mystical and redemptive love. “A mystic may be called a man in love with God,” she wrote in From Union Square to Rome (1938). “Not one who loves God, but one who is in love with God. And this mystical love, which is an exalted emotion, leads one to love the things of Christ. His footsteps are sacred.”

To follow in Christ’s footsteps, for Day means to be another Mary—to accept God’s call and to bear his love, to bring Christ into the world. Mary “did not wait until Christ had been brought forth before she set out as an apostle,” Day observed in 1954. Day’s feminist moral vision flows from the same fount as Mary’s Magnificat, that canticle of thanksgiving, deliverance, and hope which became for Day a “revolutionary anthem.”

June O’Connor has opened a long overdue dialogue between Dorothy Day and contemporary morals and theology. The task now is to follow the subterranean currents that connect Day to the mystics of the Church and the long stream of women and men who have struggled to liberate this country from slavery, social injustice, and war.