On The Wrong Day 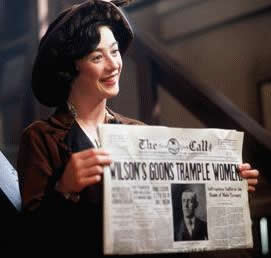 It’s too bad the new film biography of Dorothy Day has only a hearsay acquaintance with her life.

Because Catholics and others could use a timely retelling of Day’s dramatic story—which reads like the life of an ancient saint updated for 20th–century America.

Growing up poor and dysfunctional, feeling “haunted by God,” the adolescent Dorothy scoured the New Testament, The Imitation of Christ, and the legends of the martyrs, slept on hardwood floors to mortify her flesh and wrote breathlessly in her little red diary about wanting to suffer for the sins of the world.

When her “fall” came in her late teens and early 20s, she went down hard. At once, she became a Marxist who believed in the revolution of the masses and scorned the opiate of religion, a feminist who suffered beatings and jailings for the suffrage cause, and a shill for Margaret Sanger’s crusade to “save” the poor by birth control.

A born-again bohemian in the Roaring 1920s, she was a casualty of the century’s first sexual revolution, used as a plaything by men, forced into an abortion. Married on the rebound to a polygamist only to split up after a Jazz Age journey to Europe, she ended up shacking up on the beach and having a love–child by an anarchist who didn’t believe in God or “bourgeoise” conventions like marriage.

Then came her halting conversion to Catholicism, and a few years later, after praying desperately in the Catholic cathedral in the nation’s capital on the feast of the Virgin Mary’s Immaculate Conception, she found a homeless French peasant-intellectual, Peter Maurin, on her doorstep.

Together, they started the Catholic Worker movement in New York City, and until her death in 1980, she was one of the country’s most visible and intriguing witnesses to Christ—a single, working grandmother living in the slums, with an uncompromising passion for nonviolence and radical social change, a traditional Catholic piety and an ever–deepening mystical faith.

“Entertaining Angels” ignores much of the obvious divine drama of her life, opting instead for a Sunday–night–made–for–TV story of Day as victim–survivor journeying to self–awareness, model for everywoman. Dramatic elements in her life that don’t fit this story line are ignored, told wrong or clumsily distorted.

So in showing her preconversion years, we get not the real-life woman who wrote articles such as “Mr. J.D. Rockefeller, 26 Broadway—Here’s a Family Living on Dog Food” for the country’s leading socialist daily, or the woman who interviewed Trotsky in exile and could argue labor history and revolutionary theory. No, we get Dorothy Day as plucky young flapper, chain-smoking, pounding drinks with Eugene (“The Iceman Cometh”) O’Neill and bedding down with left–wing editors.

It is a curiously anti–feminist reading of Day’s life. You would never know that she was an original social thinker and one of America’s finest, if underappreciated journalists, diarists and spiritual writers.

The Catholic Worker movement is presented as a glorified flophouse and soup kitchen with a newspaper attached. Its frankly evangelistic origins as a means of countering Marxist influence and bringing the alienated proletariat back to Christ and the Church are buried. And because Day is portrayed as more of a do–gooder than a thinker, we get no sense of her radical Catholic critique of American life.

The real Dorothy Day hated the capitalist economy that left people hungry and homeless and robbed them of their spirit. Present at the creation of the welfare state, she bucked the nation’s bishops and Catholic elites in opposing the New Deal, which she said would only engorge an already bloated state, dehumanize the poor, and innoculate average believers from their Christian duty to serve the poor-personally and with sacrifice.

She was a pacifist in an era of “the Good War” and the cold one. Renouncing her past, she came to see state–sponsored birth control and abortion as part of the “genocidal” war of the rich against the poor. In a time of division and temptation in the Church, she preached both the primacy of conscience and the necessity of obedience to Church authority.

These are all areas where Day has much to teach us today. “Entertaining Angels” prefers instead images of a post-coital Day sucking on the chest of her lover, or a stereotype–laden scene where Day stares down her archbishop and speaks in the language of the disaffected mid–level church bureaucrat: “I thought we were being Church.” There is too little of Day’s own words in this film, and even less of her spirituality. Clearly uncomfortable with Day’s traditional and distinctively Catholic piety, “Entertaining Angels” puts in its place a familiar Hollywood trope: religion as interior decoration of the soul; vague, nonsectarian “spirituality” that doesn’t make any demands or impose itself on others.

In reality, Dorothy Day the radical wrote editorials in the presence of the Blessed Sacrament, went to daily Mass, prayed the Rosary and had a mystical devotion to the Virgin Mary. In “Entertaining Angels,” she never attends Mass and she only prays near the film’s climax. But even then she is shown yelling tortured undergraduate banalities at an impassive, life–size crucifix during a rainstorm late at night in an empty church: “Where are You? Why don’t You answer me?. . . . How could anyone ever love You?”

In the movie, Day’s final soliloquy goes like this: “It’s been a very lonely life. I’ve been looking to fill the emptiness. Now I see that it begins with these people, the ones that nobody else wants . . . . They are my meeting place with God. And if I will give them a chance, I know that God will fill me with love, fill me through these people.” Not bad sentiments. But that is nothing that Dorothy Day ever said or would say.

The problem with “Entertaining Angels” is not so much the acting—the spirited Moira Kelly, in the lead, especially, does her passionate best with rather thin material.

Unfortunately the producer, Paulist Father Ellwood P. (“Bud”) Kieser, has chosen to bring to the screen a script (by John Wells of television’s “E.R.”) that tends toward a lazy psychologizing and moralizing about a woman who overcomes her “past.”

As such he is unable to portray Day with any depth and complexity. She comes across as just another, idealistic, “needy” young person. But Dorothy Day’s own writings from this period reveal a markedly differently person—passionate, visionary, literary, and capable of great personal sacrifice. By the time of her conversion, she was able to see her past with a clarity that Kieser cannot or has chosen not to.

The makers of “Entertaining Angels” have complained loudly that Hollywood wasn’t ready for the hard–core religious message of Dorothy Day’s life. That’s probably true. But neither were they. There’s more to making a movie “religious” than having the hero cross herself hurriedly like a schoolgirl or blowing bizarre chorale music into the background. And what this movie delivers is only a portrait of a social worker with a big heart.

The real Dorothy Day got left out of the picture.