What else do we all want, each one of us, except to love and be loved—in our families, in our work, in all our relationships. God is love. —Dorothy Day

Dorothy Day’s dramatic conversion story has been compared to St. Augustine’s Confessions. In New York City in the years before World War I, she was a Marxist journalist who scorned religion and worked passionately for a worldwide communist revolution. A radical feminist, she went to jail in the struggle for women’s right to vote. She spent late nights drinking and debating love and politics in seedy Greenwich Village bars. In her early 20s, she was forced into a back-alley abortion, then skipped the country to travel Europe with a new lover.

Some years later, living in a cottage on the beach with a common-law husband, she found God—in the wonders of nature and the joys of motherhood. 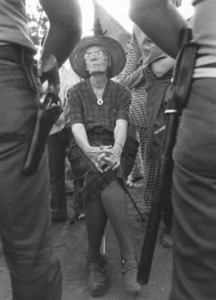 Following her conversion, in 1933 she founded in the Catholic Worker Movement. Until her death in 1980, she was the most fascinating witness to Christ that America has ever seen—a single, working grandmother living in the slums of New York, going to Mass and praying the rosary daily, serving the poorest of the poor, protesting war and poverty, starting communes across the country, and leaving an unparalleled legacy of spiritual and social writing.

Praying in the Presence of Our Lord with Dorothy Day collects her finest spiritual writings—on prayer, the Eucharist, the saints, and the power of love. Dorothy Day wrote as she lived—with deep faith in Christ’s presence in the Eucharist and in the poor, and with a lively sense that God is to be found in the joys and struggles of everyday life.

See why the Vatican has been asked to declare Dorothy Day a saint. See why a modern saint like Mother Teresa once wrote to her: “So much love—so much sacrifice—all for Him alone. You have been such a beautiful branch on the Vine, Jesus…You have accepted all with great love.”

Love casts out fear. Even the most ardent revolutionist, seeking to change the world, to overturn the tables of the money changers, is trying to make a world where it is easier for people to love.

View this book on Amazon.com